The History of Ghana

The History of Ghana

The area of west Africa now known as Ghana has a deep and storied history involving Saharan trade routes, European traders, and a fight for independence.

There were Arab writers who documented some of the history of Ghana, but the recorded history of West Africa doesn’t really begin until the arrival of European explorers in the 15th century. Before that, the history involves a good bit of speculation and has been subject to revisionism.

Archaeological discoveries have indicated the presence of human activity as far back as the Bronze Age of 2,000 BC. These societies were found in central Ghana just north of the forest zone and along the rivers and lagoons of the coastal regions where fish were plentiful. Few of their remains have been found, and not much is known about what happened to these small societies.

Much of Ghana’s history is a product of its great deposits of gold and its location as the southern terminus of the Saharan trade routes.

The powerful Ghana Empire came into existence in 300 CE and existed in some form until 1235. The empire was named after its emperor, Ghana, and was located about 500 miles north of the present Ghana in what is now southeastern Mauritania and western Mali. The domestication of the camel brought mobility and trading between African societies, and the Ghana Empire flourished from trading their vast resources of gold, ivory, and salt for manufactured goods from Europe, northern Africa , and the Middle East. With its abundant of riches, the Ghana Empire was able to build urban centers and expand its territory, thus gaining more control over the trade routes. Ghana was considered to have the strongest warriors and to be one of the most organized states in region, but it finally succumbed to attacks by its neighbors in the 11th century.

In northern Ghana, the Dagomba states emerged in the 11th century around the present day city of Tamale and flourished as one of the major empires of West Africa until the 16th century. The Dagombas were an ethnic group, and they still exist in the area. Although the rulers of the Dagomba states were not usually Muslim, there were Muslims among them who acted as scribes and medicine men and spread the Islam faith.

Akan-speaking people migrated from the Sahara into the forested areas of Ghana toward the end of the 15th century. They were experienced traders, and they introduced agricultural crops that were well-suited to the forest conditions, including bananas, sorghum, and cassava. The Akan people gained prominence in gold mining and trading, particularly in the gold-rich southern states of Akan and Twifu in the Ofin River Valley. From the 17th century on, they were among the most powerful groups in west Africa. 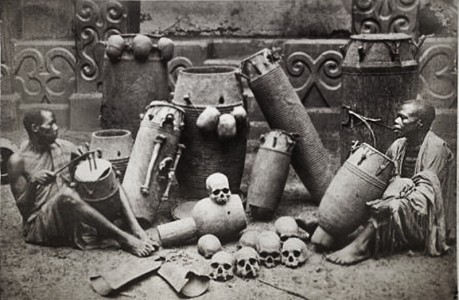 The Ashanti are the largest sub-grouping of the Akan people, and in the 1670’s they rose to power over the rest of the Akans under the leadership of their military leader Osei Tutu. The large Ashanti kingdom was created with its central base in present day Kumasi. The Ashanti Empire remained powerful until the mid-18th century.

The Europeans first arrived in the the Ghana area in the late 15th century. The Portuguese were the first to arrive. They came looking for gold and ivory, and they established the first trading post on what became known as the Gold Coast in 1482. The fortress, now known as the Elmina Castle, still stands. The Portuguese remained as the primary European trading partners until the Dutch arrived in 1598, followed in the next 50 years by the British, Danes, and Swedish. Eventually, the Gold Coast was populated by over 30 forts and castles and had the largest concentration of European settlements outside of Europe.

Ashanti was one of the few African states able to offer serious resistance to European colonizers and limit their influence in the region. The Ashanti were known as an organized and fierce people, and they were able to resist repeated attempts by the Europeans – and the British, in particular – to conquer them. Between 1823 and 1896, the Britain fought four wars against the Ashanti kings in the Anglo-Ashanti Wars. The British finally defeated them in 1901 and brought them into the Gold Coast colony as a protectorate.

At the beginning of the slave trade in the Gold Coast, the Ashanti people did not participate in the export slave trade. Instead, they actually purchased some of the slaves from Portuguese traders who had brought the slaves to the coast to export from the Congo and Benin. Slaves used in African communities were generally treated much better than slaves that were shipped to the New World. They were given rights as citizens and treated as family members by their owners.

Beginning in the 1500’s, slaves gradually supplanted gold as the main form of trade on the Gold Coast, and the Gold Coast became the main source of slaves headed to the plantations of the New World. The slave trade in West Africa peaked in the eighteenth century, and it is estimated that 5,000 slaves per year were exported. Many more died while being captured or in captivity. There was plenty of competition and conflicted among the European powers with a presence in the Gold Coast, and African traders prospered as well. The Ashantis were able to establish greater dominance over their region with the muskets they got in exchange for the slaves.

Between 1804 and 1814, the Danes, British and Dutch each in turn outlawed the trading of slaves. The importation of slaves into the United States was outlawed in 1808.

The British were the only traders left in the Gold Coast after the Dutch withdrew in 1874. From 1824 to 1901, there were five conflicts between the British and the Ashantis in the Anglo-Ashanti Wars. The wars were mainly over the Ashantis wanting to gain leverage over the coastal regions under British control in order to gain a stronger position in the trading industry. The British had also protected the Fantes who lived along the coast from invasion by the Ashanti’s. The British were able to drive them back, and the Britain made the Gold Coast a a British Crown Colony in 1901.

Beginning in 1850, the coastal regions increasingly came under control of the governor of the British fortresses. A  was formed, and in 1900 three chiefs and three other Africans  were added as members. The inclusion of Africans from Ashanti and the Northern Territories on the Legislative Council did not take place until much later, however. Although the power was concentrated in a central government, much of the control was delegated to local village councils of chiefs and elders, and traditional laws and customs were respected. Traditional chiefs maintained power but took instructions from their European supervisors.

Significant progress was made in social, economic, and educational development during the first half of the 20th century. Communications and railroads were greatly improved, and coffee and cacao were introduced and greatly impacted the economy, and the colony’s earnings increased further from the export of timber and gold. By the end of the World War II, the Gold Coast colony was one of the richest and most educated territories in West Africa.

Movements towards political freedom started soon after the Second World War, partly as a result of veterans with broadened horizons returning from the war with limited opportunities offered by colonial authorities. Additionally, an educated class of nationalists led by Africanus Horton, the writer John Mensah Sarbah, and S. R. B. Attah-Ahoma called for elected representation in government.

In 1947,  the United Gold Coast Convention (UGCC) was formed by a group of educated Ghanaians known as the Big Six with the aim of self-government ” in the shortest possible time.” The UGCC quickly won the right to have an African majority in the colony’s legislative assembly, but they wanted a share in executive power. Enter Kwame Nkrumah, who returns to the Gold Coast after twelve years of study and radical politics in the United States and Britain. Nkrumah becomes general secretary of the UGCC and quickly expands the base. Riots take place in Accra and other towns and cities in 1948. The Big Six, including Nkrumah, were imprisoned by the British authorities from 12 March to 12 April, 1948.

Nkrumah broke off from the UGCC and formed the Convention People’s Party (CPP), which increased the pressure on Britain by demanding “self-government now.” Nkrumah gained a quick following by appealing to the working class and the ex-servicemen instead of the elite and educated.

In early 1950, the CPP began a campaign of widespread strikes and nonviolent resistance, and Nkrumah was soon arrested and imprisoned for sedition. Unfortunately, for the British, Nkrumah’s imprisonment only served to consolidate support and make him a hero. In 1951, the first elections were held for the Legislative Assembly under a new constitution. Nkrumah won a seat while still in jail, and the CPP won 34 of the 38 elected seats in the Assembly. In 1952 the new position of prime minister was created, and Nkrumah was elected to the post by the Assembly.

In 1956, after debate, the assembly voted unanimously (the opposition was not in attendance) to authorize the government to request independence within the British Commonwealth. The British government accepted the proposal, and on 6 March 1957, the former British colony of the Gold Coast was to become the independent state of Ghana. Nkrumah was the prime minister, and Queen Elizabeth II was the monarch. This status of Ghana as a Commonwealth would continue until 1960, when after a national referendum, Ghana was declared a republic.

Ghana was the first west African nation to emerge from colonialism.

The First Years as Ghana

Unfortunately, Nkrumah did not keep Ghana’s best interests at heart. He worked had to eliminate his rival threats and succeeded in established a one-party system. The CPP ruled, he became president for life, and he has dreams of leading the all of Africa into a Marxist future. His plans fell through when the economy collapsed, followed by a coup when he was away in China in 1966. He went into exile in Guinea and died in 1972.

In 1969, Kofi Busia, a university professor and an opponent of Nkrumah, was elected became prime minister. As an intellectual with popular support, much was expected of Busia. However, continuing economic difficulties due to high debts and weakened cocoa prices resulted in his ouster by military officers in 1972.

The rest of the 1970’s say more turmoil, as two military generals, Ignatius Acheampong and Frederick Akuffo, ruled Ghana from 1972 to 1979. In 1979, a group of younger officers, led by Flight Lieutenant Jerry Rawlings, take power. Acheampong and Akuffo are executed, many military officers were fired, and arrangements are put in place for speedy elections.

Hilla Limann was elected as prime minister, but the economy continued its decline and he only lasted two years before Rawlings and his fellow officers intervened again. This time Rawling was in charge, and he wanted a populist government. The new government that took power on December 31, 1981, was the eighth in the fifteen years since the fall of Nkrumah.

Fortunately, Rawlings proved an efficient leader, and his economic policies worked and garnered international support. He remained as president until stepping down in 2000.

One thought on “The History of Ghana”